The electric vehicle market has spiked in momentum over the past few years. Using lithium-ion batteries to power the vehicles produces no emissions, contributing to that step in saving the planet. However, there is another sustainable way of powering a vehicle, and that is with a Hydrogen Fuel Cell, a fuel source in its early stages of implementation within the automotive market. 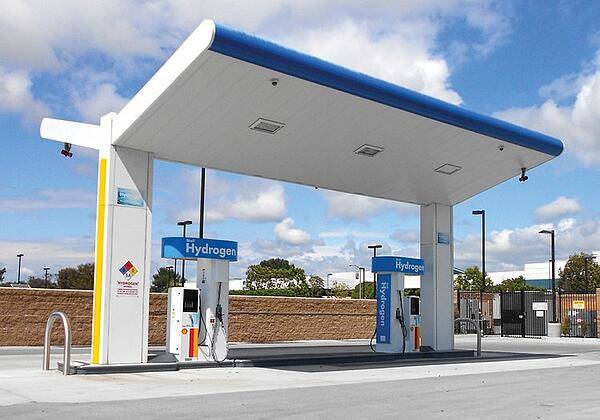 What is a Hydrogen Fuel Cell Electric Vehicle?

Hydrogen-powered vehicles use a propulsion system similar to the electric cars we see on the roads today, energy is stored as hydrogen and converted to electricity by the fuel cell.

Instead of filling the car with petrol or diesel, it will need to be filled with pure hydrogen gas. Using this gas will allow for a short filling time and a high mileage range.

These vehicles will be equipped with the same advanced technology as EVs such as regenerative braking, allowing electricity to be reused in the electric motors.

How Does a Hydrogen Fuel Cell Vehicle Work?

These vehicles produce no emissions, water is in fact the only element that is discharged from the car in the form of vapour.

Let’s start with the positives. They are emission-free, only producing water vapour. Refuelling takes the same time as filling an LPG (Liquified Petroleum Gas) vehicle, with no plugging in and waiting for an 80% charge for half an hour. They provide a more extended mile range than electric vehicles, over 300 miles on average, allowing for any length of journey.

Now for the cons. Unfortunately, the infrastructure for powering hydrogen cars is minimal. Filling stations for hydrogen are scarce, with only 11 across the whole of the UK. As there is a very small portion of drivers of this type of vehicle, there is less need for more hydrogen filling stations. Manufacturers are gradually looking into hydrogen fuel cells, but currently, there is a minimal range of models; two of the most prominent ones being the Toyota Mirai and the Hyundai NEXO.  Hydrogen fuel cells are an emerging technology, making the manufacturing process extremely expensive. Also, the cost to build hydrogen fuel stations needs to be reduced for the hydrogen economy to be supported.

The Future for Hydrogen Cars

From a sustainability perspective, hydrogen fuel can’t be ignored. Creating a broader 'hydrogen economy' will encourage the development of this market. Building hydrogen fuel stations will also be sufficient to get the ball rolling and allow an increase in these type of vehicles.

There is the possibility of the whole energy sector incorporating hydrogen into the mix, from refuelling cars to storing energy for homes.

The most significant downside in the process of building the whole hydrogen infrastructure is creating hydrogen fuel stations and a support system as these will cost billions of pounds and take several years to build.

Hydrogen can potentially be produced on-site rather than being transported, which would mean fuel stations would not need to rely on deliveries.

The cost of manufacturing and producing hydrogen vehicles is still an issue we must face. A hydrogen car can cost more than £54,000, but as technology improves and becomes more common, prices will decrease and be more affordable.

The Hydrogen Council, a global initiative of 132 leading energy, transport, industry and investment companies with a long term vision to develop the hydrogen economy; predicts that by 2050 hydrogen may power over 400 million passenger cars worldwide, 20 million trucks and 5 million buses.

How do Electric Cars Cope in Adverse Weather?