The 2020 guide to electric vehicles

The 3 main categories of electric vehicles

These vehicles produce zero emissions and are great for the environment. They’re powered purely by batteries which owners recharge either at home or at public charging points. Charging at home using a dedicated home charger is usually the preferred method for owners. In terms of costs, a fully installed home charging point costs from £299 with the government OLEV grant and once it’s installed, you’ll only be paying for the electricity you use.

The newest technology of the lot. A hydrogen fuel cell vehicle powers the car by a series of chemical reactions between oxygen and hydrogen to generate electricity. The potential solution for an eco-friendly method of transport, the only waste product that these vehicles produce is water from the tailpipe. Hyundai have recently developed their own hydrogen powered car with the Hyundai NEXO.

It all sounds pretty simple right? Well if you’re in the market for an EV then you’ll likely come up against some acronyms which explain what type of EV the vehicle is. Many of these are variants of hybrid vehicles, with several options available. See our acronym buster for a summary of what these acronyms mean: 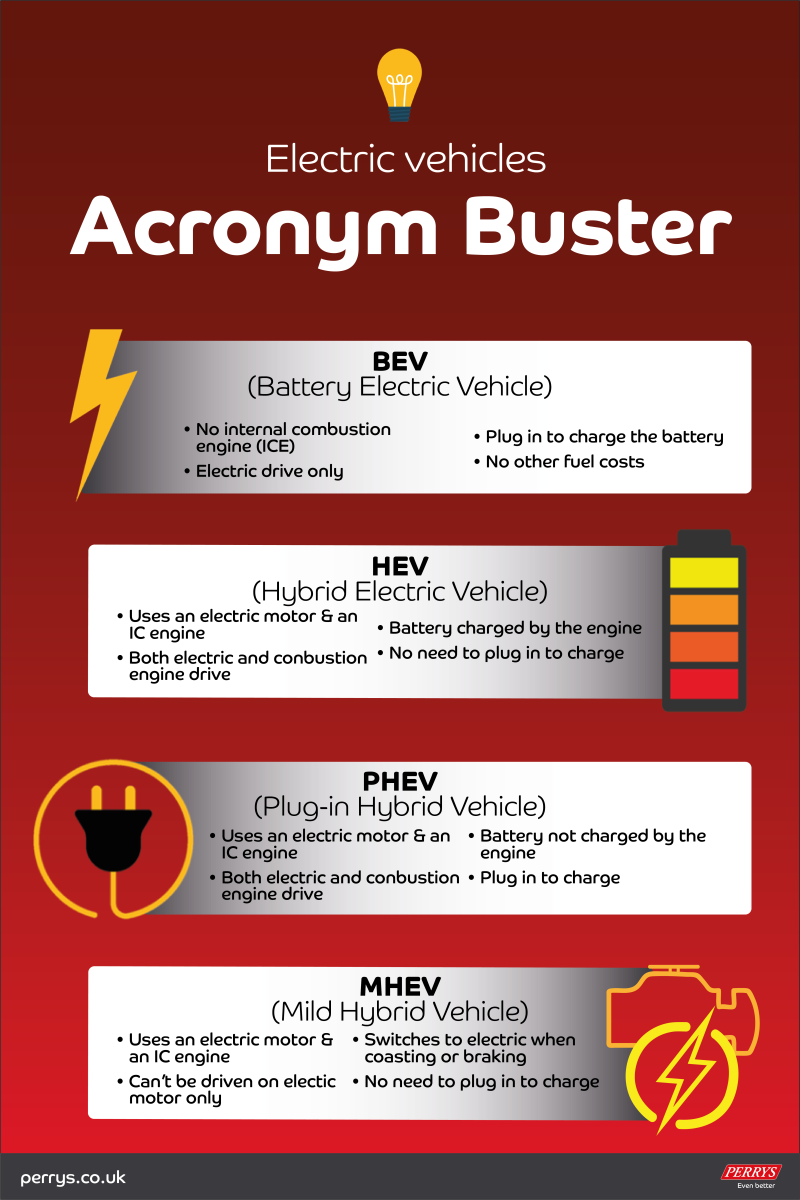 What is an EV?

EV stands for Electric Vehicle. This term usually incorporates all the different type of electric vehicles listed below, so if you hear the term EV then it’s worth checking which type it is.

What is a BEV?

BEV stands for a Battery Electric Vehicles. These vehicles are operated by a battery and have no internal combustion engine (ICE). Also known as “fully electric” cars, they need to be plugged in to charge them, either at home or at a charging point. Interestingly, these cars have no exhausts, no clutch or gears and run silently.

What is a HEV?

HEV stands for Hybrid Electric Vehicle . These vehicles are operated by both electric and an ICE. The key point here is that the battery is charged by the engine so there’s no need to plug these vehicles in. Usually just running at low speeds, the engine will only kick in when you want to go faster. A Hybrid would be better than an electric car if you are likely to be doing longer journeys a few times a week, as it allows you to simple utilise the fuel reserves rather than hunt for a charging point in order to get to your destination.

What is a PHEV?

You guessed it, PHEV stands for a Plug-in Hybrid Electric Vehicle. These are the same as the HEV above but you will need to plug these in to charge them. The P used for Plug-in only appears here, fortunately they assume everyone knows that BEVs also need plugging in or else we’d also have PBEV to add to the list of acronyms!

What is a MHEV?

MHEV stands for a Mild Hybrid Electric Vehicle. You’d think a MHEV is very similar to a HEV but it’s actually closer to an ICE vehicle. The battery cannot propel the car forward, it simply assists the efficient running of the engine during certain functions such as the start/stop system.

If you think that’s all the acronyms used, you’d be wrong. How about a quick fire round for the rest?

As you can see there’s plenty of crossover with all of these terms, so we hope this article has helped you understand the world of electric vehicles a little better. Here at Perrys we’re very excited to offer alternative fuel vehicles at our dealerships across the country. Why not get in touch with your local dealership and check out the types of electric and hybrid vehicles we offer?

Taking Your Car on Staycation

We use cookies to help give you the best experience on our site and to improve the relevance of our communications with you. By continuing to browse the site without changing your settings, we’ll assume that you agree to use of our cookies. You can find out detailed information on how we use cookies in our cookie policy.